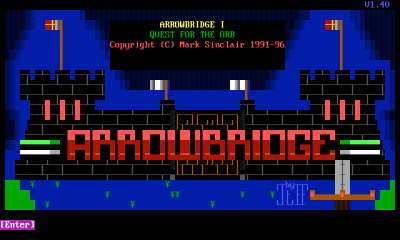 Title screen from Arrowbridge I

Arrowbridge I: Quest for the Orb and its sequel Arrowbridge II: The Guardians of Darkness are multiplayer, dungeons-and-dragons-style role-playing door games for bulletin board systems.

In Arrowbridge, players explore an extensive map which features dungeons and dragon lairs. Players can fight one another, build castles, perform special missions. [1]

Arrowbridge supports inter-BBS play. Players on one board could send assassins and "Destructors" to attack players on a different board. Inter-BBS messaging and top-player lists were also available.

Arrowbridge I was first released in 1991 by Mark Sinclair of Gargoyle Productions.