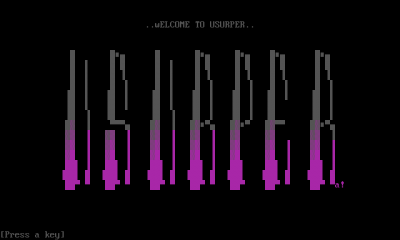 A title screen from Usurper

In Usurper, players can work alone or form teams as they explore the numerous dungeons of Durunghins. The goal is to reach the deepest level. Along the way, players can fight monsters -- or one another.

As with most role-playing games, Usurper allows the player to customize his or her character. Players can choose a races from a list of standard fantasy types like humans, elves, and orcs; as well as a profession like assassin or magician.

Unlike many BBS door games, Usurper allows for multiple players to play together in real-time.

Usurper was first released in 1993 by Jakob Dangarden, around the height of the popularity of the similar game Legend of the Red Dragon.