Legend of the Red Dragon 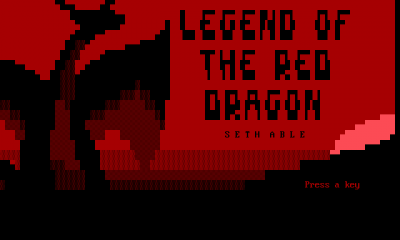 A title screen from Legend of the Red Dragon

Legend of the Red Dragon (LORD) is a text-based role-playing door game, released in 1989 by Robinson Technologies.[1] LORD is one of the best known door games.[1][2] The player's goal is to improve his or her skills in order to defeat the Red Dragon which has been attacking the village. The software is compatible with DOS, Microsoft Windows, and OS/2.

A title screen from Legend of the Red Dragon

LORD was created by Seth Robinson of Robinson Technologies. Because he did not have access to other door games such as Trade Wars, he wanted to make a game that would get people to call his BBS.[3]

Robinson initially wrote LORD in Pascal. The first version of LORD only featured the chatting and flirting systems. Over time, Robinson incorporated features that he had seen work well in other games: for example, the restricted number of turns per day, and the concept of random events, came from a futuristic casino game. Eventually LORD became a mixture of action and romance.[2]

Though he had intended to run LORD only on his own BBS, Robinson received inquiries from users who wanted to run it on other systems. After the first sale, word-of-mouth advertising increased its popularity.

By 1993, many BBSes had active communities of players[2]. Robinson once estimated LORD was played over a million times a day at its peak.[4] He sold around 15,000 to 20,000 LORD registrations to sysops, [5] but there were certainly more systems using pirated copies of the game. The game was played around the world in places such as the Philippines.[6]

In 1998 Robinson sold the game and its sequel to Metropolis Gameport. His final release of LORD was version 4.00a.

Metropolis Gameport contracted Michael Preslar on January 8, 2001, to continue the game's development. The most recent version of LORD (4.08) was released in 2009 (via the DOSEMU patch archive). According to Preslar, further updates had been planned and beta-tested, but were never released. In 2013, Preslar said he no longer had a system capable of working on the game.

The premise of LORD is that a red dragon is wreaking havoc in a town where the player has recently arrived. Multiple players compete over a period of weeks to advance their skills and to kill the dragon. In order to achieve this goal, players must face combat to gain experience. Once they have gained enough experience, they must face their master at Turgon's Warrior Training and advance in skill level. Advancement presents stronger enemies and masters; a player must reach level 12, the final level, before challenging Turgon himself and attacking the dragon.

Players select a character class, choosing from among Death Knight Skills, Mystical Skills, and Thieving Skills. While a player is training in a particular skill, s/he is subject to random events in the woods for that particular skill, which provide opportunities for advancement. Eventually, players may master all three skills.

Players can take a certain number of actions every day. Actions could be to fight monsters in the forest, attack other players or to attempt to slay the Red Dragon itself. In addition, every day a player can send a "flirt" to another player character which may range from a shy wink, to sex, to a marriage proposal. Sex may result in contracting sexually transmitted diseases, and female characters might become pregnant.[2]

Screen capture of 'Legend of the Red Dragon gameplay session

There are three NPCs located at the inn: Seth Able the bard, Violet the barmaid, and an unnamed bartender. Seth Able the bard will sing a song for a player. Once a day, players can listen to Seth's song and receive a bonus, such as the doubling of one's bank account, or additional forest or player vs. player fight opportunities. The bartender provides services and information to any warrior who can pay him in gold or gems, but provides nothing for free.

Male players can flirt with Violet, and female players with Seth Able (named after Robinson[2]), in a fashion similar to flirting with other players. [7] Success is based on the player's charm points. A marriage to Violet or Seth may last one day or two months or more; unlike player-player marriages, the software may terminate these bonds at any time. During marriage, offspring are possible, and these bring sometimes surprising benefits to warriors.

A custom RIP-graphics title screen for Legend of the Red Dragon by ACiD.

Like other BBS games, LORD uses a text interface with support for ANSI color.[1] Later versions of LORD also supported RIP graphics, which required the use of a RIP client to view.

LORD features several in-game public message boards, as well as a limited electronic mail system, which players can use to communicate. Players also may use the mail system to send flirtations to other players of the opposite sex, propose trysts, or propose marriage.

In unregistered games of LORD, players cannot advance beyond level 6. Crippling this feature encouraged users to ask sysops to register the program. Sometimes users would even send donations to the sysop for that purpose.

In-game modules (IGMs) are small software extensions written by third-party developers that add functionality to LORD. A number of these were created and widely distributed. IGM software was first developed on the Amiga, and then ported to MS-DOS.[1]

Some IGMs were written to allow a "cheating" style of game play, and others have presented bugs or loopholes to be exploited by players.

The current maintainer of the LORD software, has introduced a scripting language called Lady in order to allow smoother development of game extensions.

In Gamasutra's essay on the history of computer role-playing video games, LORD was considered to be a highly playable and memorable game, with colorful text and humor.[1] The Escapist magazine highlighted the way LORD handled sexuality, which became more mature as Robinson developed the game over the years.[2] In 2002, a reviewer in the New York Times said LORD was still his favorite online role-playing game, praising it as a straightforward game with a clear goal, and touting its extensibility.[8]

Robinson developed an official sequel, Legend of the Red Dragon II: New World, in 1992. It featured real-time multiplayer gameplay, with ANSI art graphics, in a Rogue-like[1] top-down view. LORD II's final release came in 1998, before its sale to Metropolis Gameport.

The first LORD spin-off, Tournament LORD, was written by Robinson. It was a multiplayer version designed for the MBBS/Worldgroup BBS systems.[2]

The second port was Wildcat Tournament Legend of the Red Dragon (WT-LORD), a multi-player version created for Wildcat! BBS systems, written by Joe Marcelletti and Allan Benjamin. Robinson was impressed with this port and used some of its features in later releases of LORD.[2] It was maintained by IceRage Technologies but is now freeware and no longer developed or supported.

Legend of the Green Dragon