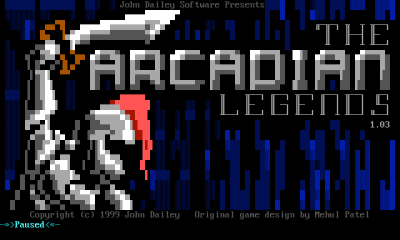 A title screen from The Arcadian Legends

The Arcadian Legends is a multiplayer, empire-building strategy door game for bulletin board systems set in medieval times.

In TAL, the player begins as ruler of a small county. The goal is to build the largest, strongest county.

Gameplay in The Arcadian Legends is similar to its SRGames cousins, Barren Realms Elite and Falcon's Eye, also turn-based strategy games. The player must manage his county's economy, build an army, and engage in trade and diplomacy.

TAL is unique, though, in that each of its turns represents one day of a month, and during that day you can only do one thing, such as mining, farming, conducting war or sending out a treaty proposal.