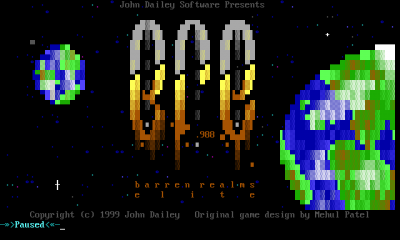 Barren Realms Elite or BRE is a multi-player strategy door game for bulletin board systems created by Mehul Patel. BRE is based on Solar Realms Elite (SRE) by Patel's brother Amit, and is considered by many to be SRE's successor.

BRE is set in a post-apocalyptic future. Nuclear destruction has spread across the planet, and now only a vast barren void exists. The player rules a barony and competes against the other players to become the strongest baron on the planet.

The basics of BRE's game play are similar to other empire-building door games. Each day, the player makes various leadership decisions, each of which can cause their population to increase or decrease. Players must carefully manage their empires by paying for maintenance, feeding the population, supplying the military and more. If something goes out of balance, the emperor can lose popular support or military morale.

At the same time, players expand their might militarily. All players may wage war on other players as well as form alliances, truces, and treaties. By capturing or buying new regions, their realm can grow more food, make more gold, or produce more military units. Players are also able to select from a list of espionage missions which can demoralize the enemy's forces, attack the population directly, weaken their defenses or many more. Finally, there is also a list of diplomatic treaties which players can use to create alliances or trade routes.

In addition to the traditional local mode, BRE offers an inter-BBS mode. This allows a sysop to join a league of bulletin boards, all competing against one another. In a league, each BBS functions as its own distinct planet in a universe of planets. Messages and attacks travel from planet to planet on a regular basis as the BBS systems call each other to transmit and receive data.

Inter-BBS play changes the game dynamics. For example, in inter-BBS mode, several BBSes might choose to work together, making alliances with one another to try to gain supremacy over the entire league. Each BBS designates a "planetary coordinator" who serves as the planet's official spokesperson. By working together with different common strategies and layouts, boards can gain various bonuses that are unavailable in the local mode.