Planets: The Exploration of Space 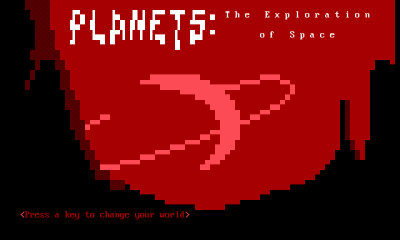 The title screen of Planets: TEOS

Planets: The Exploration of Space is a door game for bulletin board systems that can also be played in a regular DOS environment. "Planets" was the second major hit for Seth Robinson and his company Robinson Technologies, following Legend of the Red Dragon. 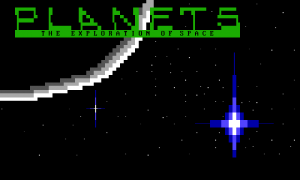 Another title screen of Planets: TEOS

Planets: The Exploration of Space, or Planets: TEOS for short, is a space drama that revolves around the interplanetary trading of goods. The main game play involves players buying items from one space station and transporting their purchases to another in hopes of selling the them at a profit.

As players accumulate their wealth, they can use it to purchase expansions to their ship, including more cargo bays, fighters drones (what players use to defend themselves), and shield batteries (when shields reach zero during battle, the player loses.) The ultimate goal of the game is to become powerful, taking over planets, buying bigger ships, and defeating NPCs and other players in space combat.

As players grow more powerful, they can attack and take over planets in the game. When they take over a planet, they can do several things, like restricting who can and can not travel to the planet directly (aka, not normally on their flight path), deposit money (like a personal bank), and determine how many fighters the planets has for its defense. Players can lose planets they have taken over in the same way that they took the planet. Planets produce fighter drones and money on their own, adding to the totals they have, making them more desirable to players.

By default, there are 26 planets available in the game, one of which is a planet called "Uniland". Uniland is notable as being the first planet most players take over, since it has only one person on the planet and is easily taken over. Other planets often have "Utopia Planetary Defense" systems installed, giving planets extra defense against being taken over.

A large part of the game is in dealing with other human players. Players can ally themselves by establishing cartels. This lets players share resources better, such as swapping money or fighters by leaving them on planets. Effective cooperation makes it easier to conquer planets and take on other humans. But being allied with others can lead to devastating betrayal.

If the Sysop registers the game, s/he will then have almost unlimited control over the game's appearance and gameplay. Many things about the game have been made customizable, including the ability to edit player files, individual planets, NPCs, and even each space craft that players can buy. This control can end up allowing a sysop making his game different than other BBSes, which can attract players.

Among the player benefits in registation includes being able to buy other ships.

The game had a huge influence from other space dramas like Star Trek and Star Wars. The game offers players who find neutrality boring two diametrically opposed factions to choose between: the Alliance or the Maraken, similar to that of Star Wars' the Empire and the Rebels. Some of the NPC names are similar to names from both, "Five of Seven" to give an example.[1]

Many other references from the game alludes to the many influences Seth had. For example, one of the many was that at one point in time, Seth Robinson had a crush on Jennie Garth from Beverly Hills, 90210 and this showed up in Planets: TEOS, as at least one default NPC ship captain's name was Jennie. Other default names included movie references, like Wayne and Garth.[2]

The latest version of Planets: TEOS is 2.02 and a "demo" version is available from Metropolis Gameport's website.