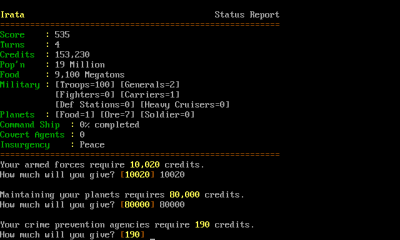 Space Dynasty is a strategy door game for bulletin board systems by Hollie Satterfield. Players rule an empire with the goal of acquiring the most planets.

Space Dynasty is all about building and maintaining an empire. Players are responsible for feeding their population, producing profits and purchasing military equipment. Mismanagement can result in civil war, resulting in the loss of half of a player's planets.

Some players would try to remedy such disastrous events by "dropping carrier;" that is, disconnecting the modem. The game would recover by allowing the player to start over as if they hadn't played that day.

Players obtain planets in two ways: by buying planets, or by attacking other players and taking their planets. There is also a computer-controlled empire called The Radoffian Dynasty; it has the ability to seize players' planets without attacking them and to hijack their fuel freighters. 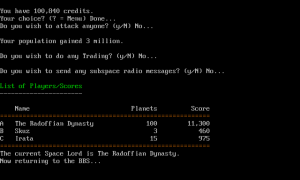 Gameplay in Space Dynasty is asynchronous: players have a set number of turns to play each day, but only one player can use the game at a time.

Play begins with a diplomatic phase, in which players can form alliances or make peace treaties with other players. At the beginning of each turn, the player receives a status report and is asked how much he would like to pay for maintaining planets, crime prevention, etc. Then there is an opportunity to buy and sell food, conduct covert actions, buy military units and other supplies, attack other empires, and send subspace messages. New players are protected from attack for 20 turns.

Players can use covert agents to spy on another dynasty; assassinate a general; sabotage a carrier; foment insurgency; and bomb an embassy. The levels of insurgency are mild insurgency; violent demonstrations; riots; political crime; terrorism; guerrilla warfare; revolutionary warfare; and under coup. The success of a covert action depends on the number of agents the two empires have.

The game continues until the sysop decides to reset the game.

Space Dynasty is a PC adaptation of two BBS doors written for the Atari ST: Space Empire Elite by Jon Radoff and Galactic Empire by Andromeda Software. Space Dynasty is written in Turbo Pascal and it was played primarily on WWIV BBSes.

Space Dynasty was released around the same time as Solar Realms Elite, another PC door game inspired by SEE, written by Amit Patel.