TradeWars 2002, also known as Trade Wars 2002 or TW2002, is a space trading and empire-building strategy game developed by Gary Martin of Martech Software for play as a door game for bulletin board systems.[1]

It has been called "perhaps the granddaddy of all BBS games"[2] and at the height of its popularity was played by tens of thousands of enthusiasts around the world.[3] TW2002 was ranked No. 10 in a PC World article titled "The Ten Greatest PC Games Ever" in 2009[4]; the article cited Eve Online as an example of TW2002's influence.

In TW2002, players assume the role of a space trader who travels the galaxy buying and selling resources. Players amass wealth which they can use to upgrade their ship with better weapons and defenses. Ultimately, players battle for control of planets and starbases.[2]

In mathematical terms, a TradeWars universe is a directed graph in which the sectors are vertices and the warps are edges. The complexities of efficiently navigating or partitioning the graph are a large part of what makes the game so compelling. 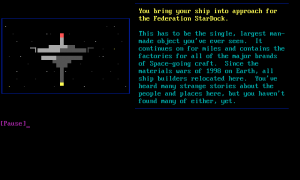 Docking at the StarDock

Ports buy and sell products, making them the primary source of income for most traders. There are three product types: fuel ore, organics and equipment. Each port either buys or sells each of product at a different price. Buying ports usually pay more than selling ports charge; this arbitrage is the basic way to earn credits in the game.

Starports may be upgraded to sell or buy additional product. Typically players upgrade ore to be used to allow mobile planets to move or to fuel their quasar cannons. They might upgrade equipment better trading opportunity. Starports, including Stardock, Rylos, and Alpha Centauri can be blown up and can be used as a valid game strategy. Ports do have defensive capabilities and may destroy the attacking player.

One of the most important ports is the Stardock, which houses the Federation Shipyards, the Stellar Hardware Emporium, and other crucial establishments. There are also three ports — Sol, Rylos, and Alpha Centauri — that specialize in selling fighters, shields, and cargo holds.

Ships allow traders to travel from sector to sector, transporting products and fighters. Each ship type has different attributes, such as speed, combat specifications and equipment it can carry. In addition, the Ferrengi have four ship types that can be acquired by attacking and capturing them.

Trading efficiency, or TE, is a factor for comparing the overall ability of different ship types to use turns effectively. The Merchant Freighter is the most efficient in a "stock edit" (default ship setup), having a TE of 100. Trading efficiency takes into consideration:

A ship's safety rating represents its ability to withstand attack. It is calculated using the total fighters plus shields, multiplied by the ship's odds. This rating is equal to the number of fighters it will take to destroy a fully loaded ship of this type, assuming an attacking ship with 1:1 odds. The Imperial StarShip, for instance, has 50,000 fighters, 2,000 shields, and combat odds of 1.5:1, giving it a Safety Rating of 78,000. This makes it a much safer ship than its closest competitor, the Corporate Flagship (Safety Rating: 25,800). 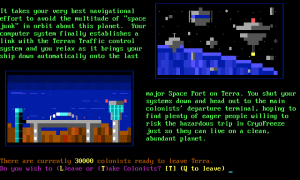 Players can create planets by launching a genesis torpedo. Colonists can then be imported from Terra and put to work generating products. Assembling ore, organics, equipment, and colonists allows the player to build and upgrade the planetary Citadel through six levels. Each Citadel level adds additional capabilities. There are seven different types of planets; earth type (Class M), desert wasteland (Class K), oceanic (Class O), mountainous (Class L), glacial (Class C), volcanic (Class H) and gaseous (Class U).[5] Some types are more popular than others, based upon how easy it is to produce fuel ore, organics, and equipment on each. For example, because of their efficient fuel ore production, Class H planets are popular for defending bases, since Quasar Cannons and other on-planet defenses use fuel ore for their ammunition. Class K planets are similar to Volcanic planets, but only half as efficient at producing fuel ore, the same as Class Ls. Class O planets have good Organics production. Class M planets are good all-around producers, and are best at Equipment production. Class Ls are similar to Class Ms, with fuel ore production as good as Class Ks and Organics production better than on Class M (Equipment production, however, is not quite as good as Class M). On the other hand, Class C and Class U planets are usually regarded as useless. (The term Class M was borrowed from "Star Trek"; the other classes appear to have been made up; although the H, K and O Classes do correspond to Star Trek classes, the others do not. For example, TradeWars Class Cs are Star Trek Class Ps.)

There are also many edits available in the popular TWGS platform that expand or change these planets by changing the time they take to reach the next citadel level, the amount of product each planet can hold, or the number of colonists a planet can hold. For instance, the popular unlimited turn "Subzero" edit for TWGS Gold has planets that can reach level 4 in a single day, expanding the tactics of play beyond the original "stock" planets.

Players can be aligned on the side of either good or evil. A player's alignment is represented as an integer; a positive (good) alignment is earned by doing good deeds, such as posting bounties on space pirates and destroying evildoers. A negative (evil) alignment is the result of evil deeds such as destroying planets and dumping colonists into space.

Good: Being a good-aligned player has four advantages:

A player with an alignment of +500 can apply for a Federal Commission. This is essentially a permit granted by the Federation to buy an Imperial StarShip. If a player subsequently becomes evil, the Commission is revoked; he is then required by FedLaw to return the StarShip to the Stardock or risk destruction by Federals such as Captain Zyrain.

Evil: When a player becomes evil enough (alignment drops to –100 or lower), he can begin robbing ports. Because of this, evils have the ability to raise money quickly. However being evil has its downside as the player may occasionally get caught stealing ("busted") and be fined. The "bust" rate is approximately 1 time in 50 steals. Each bust costs a percentage of holds on the ship and experience is lowered. Experience dictates the number of holds of product, usually equipment, a trader can steal.

Early versions of TradeWars 2002 had many bugs that evil players could exploit in the stealing routines. [6] For example, an evil player could steal from a port and immediately sell the stolen goods back to the port.

Players can form corporations to share planets, ships, and other resources. The founder of the corporation is the CEO, who can own a Corporate Flagship and control the membership of the corp.

Screenshot of landing at the StarDock, as seen from inside the TradeWars helper utility TWTerm.

The enormous popularity of TW2002 combined with the repetitive nature of the gameplay tasks required to be successful in the game led to the development of many helper utilities programs. These utilities help serious players automate tasks and keep track of the game's universe.

For example, many utility programs offered built-in macros to automate trading at ports and get the best prices. They often provided functions for mapping a game's universe, looking for one-way warps, and much more.

Gary Martin's first foray into the TradeWars universe was TradeWars 2001, which appeared in Dec. 1986 for WWIV BBSes. Martin based TW2001 on an unstable Pascal port of Chris Sherrick's early BASIC Trade Wars.

Beginning in 1987, Martin embarked a complete rewrite of TW2001. Four years later, Martin was finally ready to release the result of his efforts: TradeWars 2002, arguably the most popular BBS door game ever created.

Around the same time, Gary Martin partnered with Jeff Moriarty of High Velocity Software. HVS created an interactive multi-user version of TradeWars 2002 for Major BBS (MBBS) systems. The first HVS version (2.00) was released in January 1994. Development on the HVS versions stopped in 1997.

Upon its release, TradeWars 2002 quickly became the most popular game available on BBSes. In newspaper and magazine articles about BBSing in the 1990s, TradeWars was frequently cited as a favorite game. [7][8][9][10]

Pritchett formed Epic Interactive Strategy (EIS) in 1998 and released TradeWars Game Server (TWGS), a standalone server which hosts games of TradeWars on the internet. In 2000, Pritchett bought the rights to TradeWars 2002 from Martech. The most recent version of TWGS, v2.20b, was released March 5, 2012.