Lore is a fantasy role-playing door game for bulletin board systems.

Lore features a roguelike-style interface, allowing players to navigate the world by moving around a graphical ANSI map. There are more than 50 cities and other establishments to explore, and each location features NPCs the player can interact with. 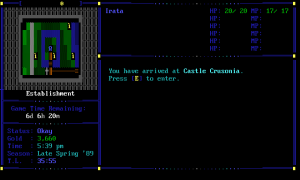 The main combat menu and map in Lore

Lore is multi-node capable, and supported real-time interaction between players. Sysops could also configure Lore in an inter-BBS mode, allowing many bulletin boards to play a single game together.

Lore was created by Warren Schrey and Justin Kominar in 1996. Schrey noted in his documentation that the underlying character and combat routines were very loosely based on the RoleMaster game system.