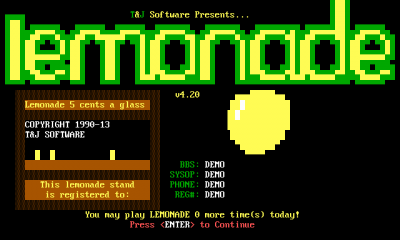 Lemonade is a turn-based economics door game for bulletin board systems similar to the classic Apple II game "Lemonade Stand."

In Lemonade, the player begins with $1 to start a lemonade stand. The goal is to make the most money possible selling glasses of lemonade over the course of several days.

The player has to contend with:

Lemonade has been described as a simple game, but "what it lacks in depth it makes up in being just plain fun." [1]

Lemonade was first released by Tom Wildoner of T&J Software in Aug. 1990.