Screen capture of a gameplay session of Land of Devastation.

Land of Devastation (LOD) is a multiplayer, role-playing door game for bulletin board systems set on post-apocalyptic Earth.

After a nuclear holocaust, a small band of humans survive within the protective walls of Sacre Base. These humans built the Puritron, a device that filters radioactive contaminants from the air, thus repairing the damage wrought by nuclear war. But the Puritron is stolen by mutants.[1]

In LOD, the goal of the player's character is to locate the scattered pieces of the Puritron and return them to Sacre Base where they can be re-assembled.

Land of Devastation was first released by Scott M. Baker in 1990.

The world outside of Sacre Base is known as the wasteland. In the wasteland, players will encounter mutants and other creatures to fight. Players also can build fortresses in the wasteland from which they can build supplies, sell items, and even charge tolls from passersby. Players can kill one another and attempt to take over others' fortresses.

A unique feature of LOD is cloning. At a facility within Sacre Base, a player can clone himself for a fee, effectively backing up the player's level and statistics. If the player's character dies later in the game, the player can activate his clone and continue playing the game without a reduction in statistics.

LOD features a leaderboard that displays players' levels and net worth, as well as the names of players who retrieved particular Puritron parts. 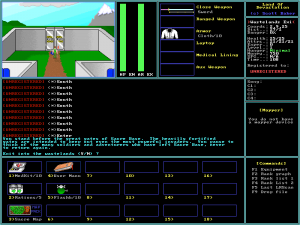 LOD was highly customizable -- sysops could change all aspects of the game, from maps to items to quests.

Each version of Land of Devastation was typically distributed as a set of five or more ZIP or ARJ files. The first two files (A and B) are required to properly run the game. The rest are optional for sysops who want to add EGA/SVGA graphics, sound, music, customizations, or support for other OSes.