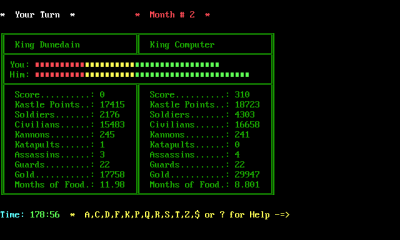 A screen shot from Kannons and Katapults

Kannons and Katapults is a single-player, turn-based door game for bulletin board systems in which a player tries to defeat a computer opponent by either destroying its castle, defeating its army, or assassination.

The game is castle-versus-castle game in which you challenge "King Computer".

The two principal weapons of the game are low-damage and inexpensive cannons, and high damage expensive catapults. In addition your kingdom has a standing army recruited from its civilian population, as well as trained assassins and guards to provide more cloak and dagger means of defeating an opponent.

As ruler of your kingdom the player is expected to manage the troop strengths, purchase guards to prevent King Computer's assassins from attacking, as well as repair battle damage to the castle walls and purchase food and weapons to keep the battle going. As the player can only perform one action a turn, savvy commanders can in some cases out wait their opponent in order to strike while they are resupplying or making purchases at the trading post.

After each player takes a turn, their score increases based on the amount of damage they caused (in some versions this score is not shown), new immigrants arrive at their castle in proportion to the strength of its walls, taxes are collected, the army and castle staff are paid, and the remainder of the funds are deposited or removed from the treasury. And last, the kingdom's food supply is decreased by one turn's worth of food.

While score accumulates during play, only the winning player gets to keep their points at the end of the game, the loser receives 0 points. Once game play has completed, the final conditions are shown and statistical information on how well the players have performed against the computer this month is displayed.

Kannons and Katapults was written by Alan Davenport. The last version, v4.4, was released in 1995.

In its May 1993 "Telegaming" issue, Computer Gaming World gave Kannons and Katapults two points out of three, noting that an entire game could be played during any logon and that "the computer fights back fairly well."[2]