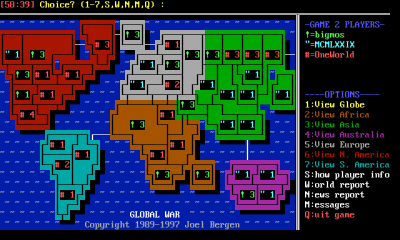 World map from a game of Global War

Global War is a multiplayer, strategy door game for bulletin board systems.

In Global War, players compete against one another for world domination. Gameplay is adapted from the popular board game Risk.[1] The world is divided into six continents and 42 countries.[2] Players decide where to amass armies for defense -- and offense. The player who first captures every country on the map is the winner.

Global War was created by Joel Bergen in 1989. Bergen hosted a WWIV bulletin board system, mostly because he enjoyed tinkering with the Turbo Pascal source code. He decided to adapt the board game Risk as a "chain" or door game for his board.[3]

Though Global War was modeled on Risk, the contraints of BBS technology meant that there had to be differences in gameplay.

The biggest difference was in how turns were played. A tabletop game might typically be played in one physical location by many players over the course of an evening. Since most BBSes of the era had only one phone line, multiple players could not connect to the BBS simulataneously. Further, there was no guarantee in what order players might call the BBS on a given day.[4] Bergen accomodated this by allowing each player one turn per day, in any order.[3] (There was also an allowance for missed days)[5]

This meant games would last many days; but because Global War automated the process of dice-rolling, the actual time a player spent playing a turn was often considerably less than in a Risk game.

Bergen has said he was very concerned about copyright. He called his game "Global War" to avoid infrininging on Parker Brothers' trademark. He also reached out to Parker Brothers to ask if they had an objections to his game, and says they responded that "they had no interest in the door game and wished me luck with publishing the game."[3]

Like many other BBS door games for the PC, Global War's interface and maps are rendered in ANSI.[6] Global War also offers a front-end client called GWTERM. This custom terminal speeded up gamelay for users with slow modems by storing the map graphics locally. Later, Bergen added a mouse-driven graphical interface.[5]

Bergen sold Global War in 1997 to John Dailey Software, along with Global Backgammon. [7]

In its May 1993 "Telegaming" issue, Computer Gaming World gave Global War three points out of three, noting it was "a widespread and active door" and that it bore "more than a passing resemblance to Risk."[5]

In newspaper articles in the mid-1990s about BBSing, Global War was sometimes listed as an example of a favorite game. [8]