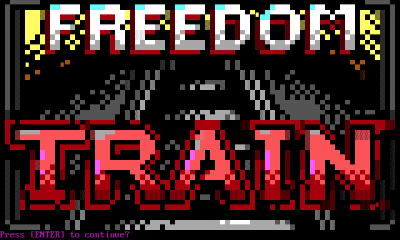 Freedom Train is a multiplayer, dystopian fantasy door game for bulletin board systems created by musician Shooter Jennings in 2016.

In Freedom Train, the player character lives in Carbon City with his wife and son. Outside the city is a quarantine zone where the "infected" live. Armed guards keep them out.

Carbon City is connected to the recently-constructed utopia Heaven by the Freedom Train. Each year, 300 families are chosen by lottery to take the train and move to this greener, safer "promised land."

Freedom Train's user interface is influenced by interactive fiction games from Infocom and Sierra On-line, but with an infusion of hypertext. Traditional adventure games require the player to type commands in simple verb/subject form. In Freedom Train, each location's description contains highlighted keywords, which act as a sort of hyperlink. Typing one of these words allows the player to move to another location, or interact with a character or object.

In Freedom Train, a mystery slowly unfolds, which the player must resolve by leveling up and solving various puzzles throughout its sprawling world. Besides the main storyline, Freedom Train features many side-quests which can be triggered by different factors, such as time of day, moon phase, or other players' actions.

Like From Here To Eternity, an essential part of Freedom Train is acquiring artifacts. These can be found throughout world during the course of the game. Artifacts can also be captured from another player by fighting and defeating them. Once a player has collected all the artifacts in the game and resolved the main mystery, the final chapter of the game will be unlocked.

Many of the puzzles in Freedom Train contain allusions to music and entertainment (song lyrics, album titles, etc), but the world is not a pop-culture mashup in the same way FHTE was.

Freedom Train differs from typical BBS door games in a number of ways: