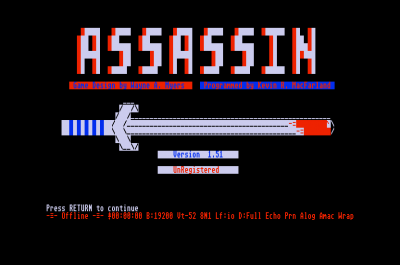 Title screen from the Atari ST version of Assassin

Assassin is a multi-player strategy door game for bulletin board systems. The game is set in a medieval city. Players take on the role of an assassin who must fight to gain experience and gold.

Beyond assassinating other players and NPCs, a player may rob people, visit the pub, join a guild, sleep in an inn, buy and sell various items at 'shoppes', obtain magic potions, slink in the alley, or dig through the graveyard among other things.

Created by Kevin MacFarland and Wayne Myers, the game was originally released for Atari ST BBSes in 1990. MacFarland later created a DOS version of the game for PC BBSes.